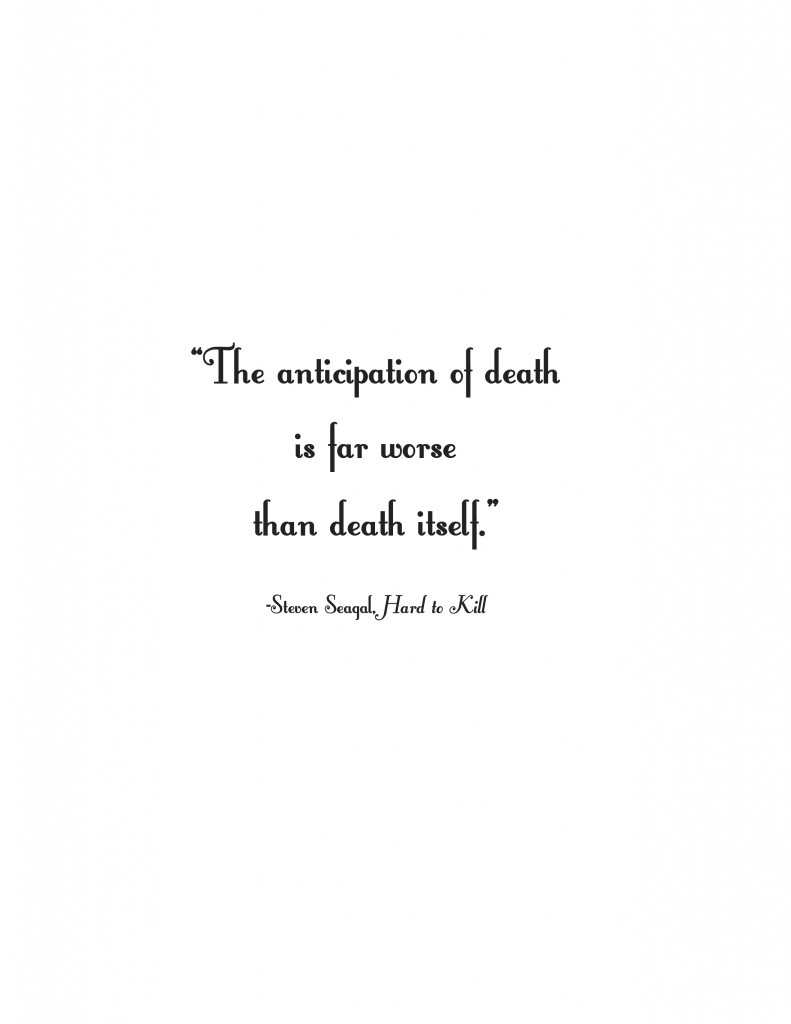 I am in the business of facing The Big Scary.

Whatever it is, let’s just get it out in the open and deal with it; I think about this a lot.

My clients are people who have quietly tiptoed around their Big Scary clutter for years, so overwhelmed are they by what monsters lurk beneath, within.

Then here I come, all sunshine and skinny jeans and say, “Hey! Let’s look at this stuff, eh?”

At first their expressions are pained, strained.

“Do you want to begin here?” I ask, pointing to a pile.

“Okay,” they say, in a tone that I understand to mean, “not on your life.”

By the end, they’re elated. Mostly they’re surprised– surprised that what they had made out to be an insurmountable evil turns out to have been manageable, and surprised at how good it feels to have managed it. They believed the only way to feel good was to avoid braving it.

When you intentionally avoid facing The Big Scary, you allow it to lord its ugly hypothetical power over you. The longer you refuse to look it in its wretched face, the more vile it becomes in your mind. You begin to tell yourself lies: you don’t have the capacity to deal with that Big Scary sitting right beside you. It’ll be just too much. Probably make you cry. And feel pain. Pain! Better to stare straight ahead, you tell yourself. Definitely, better.

The fear of facing The Big Scary is akin to denial, but the two aren’t quite the same. To live in denial is to weave a web of falsity, to wholly convince yourself that things aren’t actually as they are. Fear of The Big Scary is when you know, somewhere in the back of your vortex mind, about the existence of the something dreaded, and you intentionally shirk the task of dealing with it.

We all do this to varying degrees and with different issues. For some the unfaceable Big Scary is a bunch of clutter filling up their homes. For others it’s making a phone call to their loved one whom they’ve neglected.

I was recently having a conversation with an acquaintance about her relationship tribulations. Despite the toxicity and upset running rampant between she and her partner, she made no mention of the possibility of ending things.

It didn’t add up; she was miserable in the relationship, yet she spoke nothing of it coming to an end. It occurred to me that she was avoiding The Big Scary– that for her the potential breakup of the relationship was The Big Scary, a notion too treacherous to even acknowledge its potential.

That it scared her too much to name was an indication of her need to confront it, which is always the case in life, annoyingly enough. She was letting fear guide her, which is never all that wise.

So I suggested she look her Big Scary in the face. That that the fear of it always diminishes when you do so.

She got excited then. She told me about how she was scared silly of breaking up, how she felt that she would inevitably loose all her friends in the process, that she would be completely alone, and on. But I had ignited her, reminded her of something:

This girl, who had sat with all her limbs tucked in close to her body the way birds tuck in their wings when at rest, she who had talked all forlorn-like, had suddenly unfurled. She told me about her greatest role model “ever,” whose books she had read multiple times. They chronicled the author’s lifelong struggles: drug addition, homelessness, depression, suicidal ideations.

She explained that what she found most remarkable about her hero was her ability to look The Big Scary in the face, so to speak. Even during her most tumultuous times, the woman was adamant about expelling her fears by rationalizing through them.

“If I lose my job I won’t be able to afford my rent.” The author would agonize. And then perseverance would ride in, “But that’s okay because I can move in with my parents.”

“But if my parents kick me out I’ll have to live on the streets.” Anxiety would fire back. “But that’s okay because that will give me the motivation I need to get a job.” Logic would assure.

On and on she went, planning a way out of every predicament she could invent. In so doing, she taught herself that greatest lesson of all: she was going to be okay. No matter what, there would be an option to proceed.

She had championed facing her Big Scary’s head on. She had disolved them into worry dust that was caught up in the passing wind and carried away on her back-up plans.

We all have our own Big Scary’s; I’ll bet you have some right now.

Do you know what? Just face them.

There may be pain. There may be consequences and thundering heartbeats and heaving sobs. But by facing The Big Scary you can begin to work through it, see. The instant you acknowledge it, even then you may begin preemptively recovering from it, begin administering emotional antidotes, building up a tolerance in your system to the substance like a vaccine. You may call in all the resources you’ll need in order to conquer it. Though it may be big, you will learn by facing it that we are all, each of us, bigger still.